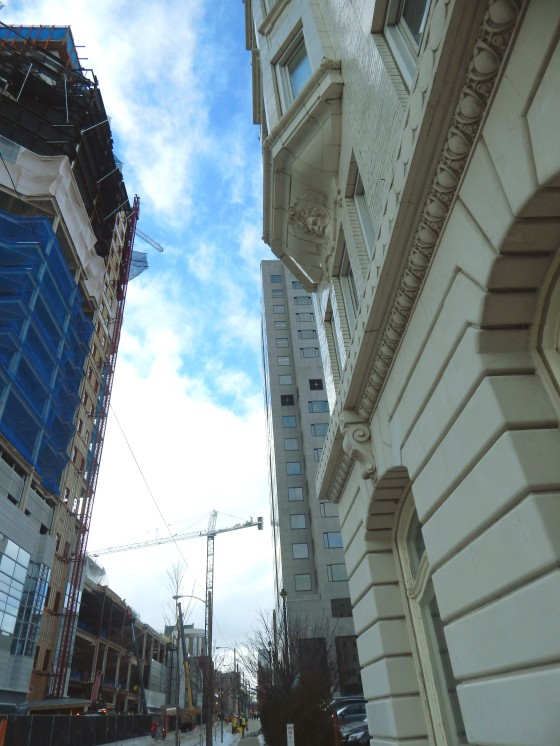 Often, lunch time is in opportunity for a walk. It breaks the day up and offers a time to disengage from work-related tasks and refresh the mind. Walking also allows some exercise for the body. Or at least that is what I try to tell myself as I walk down Mason to Prospect in below freezing—but sunny—weather.

I brought my camera along to see if I could capture some construction site photos for an ad I am designing. Once I get to The Calling sculpture by the art museum, I start thinking about composing shots of the subject. It is a high-rise building under construction.

I remove the lens cover, select camera filters, and compose a shot; the sound of heavy machinery fill the lakefront. It is a sound of one clattering, moaning creature that rises into the sky. The sound from the building site can be heard blocks away—as far as Cathedral Square. Some days I get to the office early—before the construction site roars to life—and I hear the call of lake gulls echo off the crowded buildings of East Town.

I take a dozen shots before walking a block to get a different angle of the subject—new perspective, change of lighting, and so on. That’s when I notice her.

She looks at me as she switches cameras. There is a vintage quality to the camera in her gloved hands. Looks like a Hasselblad 500C/M. The other camera looks like a Yashica-Mat. And a third camera looks more like mine—a DSRL. I slow my pace. Do I want to photograph the high-rise building from the same spot has her? Based on her gear, she knows what she is doing. I hate to disturb her shot.

But she packs her camera gear. We pass on the bridge. I take a dozen photos where she once stood. I cross the bridge, pass by the Cudahy Tower, take a few more shots on Mason Street and return to the office.

A thought follows me like a shadow. In anonymity we captured the same subject matter. On the same spot. The same day. During the same hour. We will both have a record of that moment. But we will never meet.