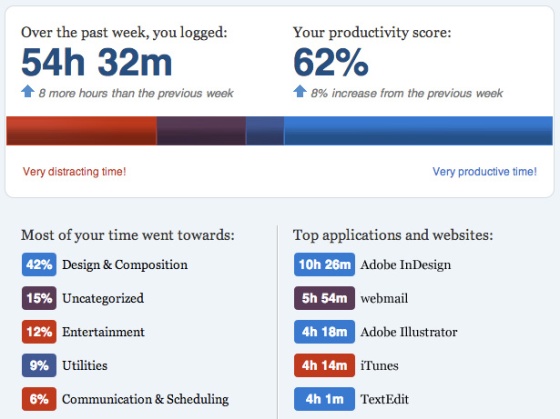 In a GTD[1] effort to increase productivity, I studied my online activity this spring using time tracking software. Currently self-employed, I wanted to make sure time is not wasted but used wisely.

For the most part, social media is out. Same goes for video games and online audio and video streaming sites (not that I ever play video games online anyone, but I do allow myself to listen to music and audio podcasts while working).

A couple times during this period I noticed that the weekly report showed that I spent four hours on Facebook. I was shocked. Maybe I left the computer on while running an errand (which could take hours due to my current rural location) and left the internet browser window open during that whole time. I made immediate efforts to close that open loop of un-productivity.

Those reports intrigued me and I wanted to find out how many hours most Americans spend on Facebook per day. According to a 2011 source, the average American spends

But, as you know, three years ago is a century ago in the digital world. A 2013 study reports that an

23 hours! That is a lot of online time. But that statistic does not surprise me. As a professional graphic designer, I spend at least 40 hours a week in front of a screen. And now, most design and communication applications are cloud based or at least supported online. So, as you can see by the screen shot at the beginning of this post, much of my time is designing books, book covers and other marketing and print materials while listening to podcasts or music.

A month ago a new report says

That is a huge increase from three years ago — 280 minutes a week spent on Facebook. 4.6 hours a week. 18 hours a month! I can layout a 240-page book in that time and maybe have time left over to design the book cover (of course, that depends on editor and author changes and corrections, but I digress).

I am sure there is a lot of news from family and friends that I miss by avoiding Facebook. But when you are self-employed those 18 hours can be used resourcefully and effectively to provide for your household — and to secure and maintain future clients. Or, at least, that is the strategy.