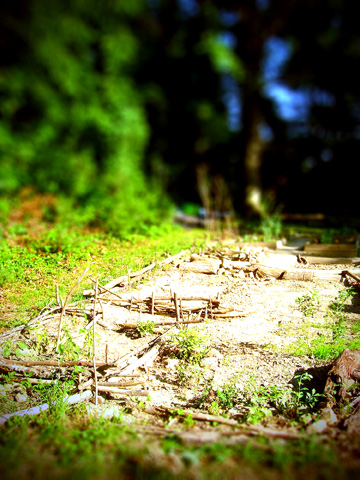 It’s hard to tell from this image, but there is more than a four foot difference between the top of the garden and the lower portion. It’s still a garden in development using found materials. Most the garden is hand tilled and bordered with limbs and branches and creek stone.

And here on earth come emulating flies,
That though they never equal stars in size,
(And they were never really stars at heart)
Achieve at times a very star-like start.
Only, of course, they can’t sustain the part.

(link: Fireflies in the Garden by Robert Frost)

Some evenings, as the sun sets, I water the garden. A two-gallon water can is used and one can of water per garden box seems to be sufficient. The other night while I watered the garden in the evening, the fireflies appeared to come up from the ground and surround me; almost as if the water droplets transformed upon impact and rose into the gathering darkness as luminous creatures. Within an hour or two I could see their light in the tallest oaks and pines surrounding the cottage. But, alas, like Robert Frost offers “they can’t sustain the part” of the stars above.

Like twilight time, the garden is transitioning. The snap peas began to wither a few days ago. I can’t tell if it is due to the lack of rain or the peas have passed their season of growth. I’ll plant kale and shard to replace the pea plants. So far the most produce comes from the chili pepper plant and the lettuce. The zucchini and squash are disappointing. It appears the leaves have some kind of mold; yielding only four vegetables. It’s too early to tell, but it looks like the tomato plants will yield well this year.

The garden project revealed something very obvious the other weekend; I really underestimated is the slope of the land. Two more boxes were built on the east side of the garden; otherwise known as the top of the garden. Each box is level, but east boxes are almost six inches higher than the west boxes. At this point, the only thing that’s in the ground are cucumbers, cabbage, lettuce and some assorted plants that lost their labels (I’ll know what I planted later this year from the fruit they yield).

Initially, the idea in my head was terrace gardening, but a challenge presented itself. Mainly this, more lumber is required for proper terracing of a slope. I suppose I could use stone for terracing a slope, but the transportation costs of delivering stones exceeds my budget. So, with limited resources, I maintain the raised bed/container gardens strategy, but have to build the boxes into the slope in such a way that each box varies in elevation from two inches to six inches. From the southeast corner to the northwest corner is a difference of almost a foot. And remember, the goal is six garden boxes.