Enduring below freezing and sub-zero weather is a challenge. Green plants in the window are a delightful remedy if not evidence of common grace.

It’s hard to tell from this image, but there is more than a four foot difference between the top of the garden and the lower portion. It’s still a garden in development using found materials. Most the garden is hand tilled and bordered with limbs and branches and creek stone.

To be honest, I ran out of supplies for gardening. So the tree limbs and branches are salvaged from winter and spring storms. Each garden section (or box) is hand tilled and mixed with compost. 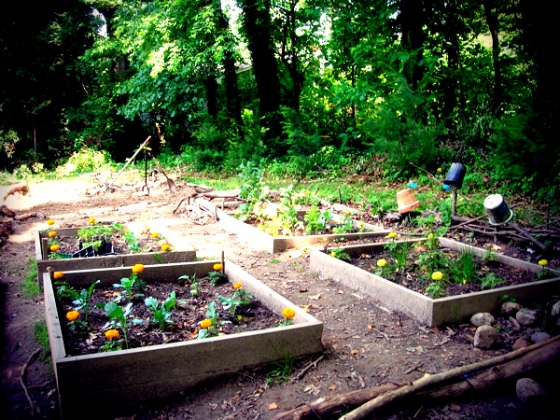 Spent much of the weekend gardening with friends and neighbors. On a quick trip downtown, I met a guy this weekend who said he thinks most Americans have lost their connection to the earth and agrarian principles. In some respects, I think he is correct. Within the mass media, consumeristic culture it is difficult to avoid the desire of immediate gratification, to change pace, and to wait 90 to 100 days to harvest the vegetables you plant. But it is rewarding to share in the labor and bounty of a harvest.

And here on earth come emulating flies,
That though they never equal stars in size,
(And they were never really stars at heart)
Achieve at times a very star-like start.
Only, of course, they can’t sustain the part.

(link: Fireflies in the Garden by Robert Frost)

Some evenings, as the sun sets, I water the garden. A two-gallon water can is used and one can of water per garden box seems to be sufficient. The other night while I watered the garden in the evening, the fireflies appeared to come up from the ground and surround me; almost as if the water droplets transformed upon impact and rose into the gathering darkness as luminous creatures. Within an hour or two I could see their light in the tallest oaks and pines surrounding the cottage. But, alas, like Robert Frost offers “they can’t sustain the part” of the stars above.

Like twilight time, the garden is transitioning. The snap peas began to wither a few days ago. I can’t tell if it is due to the lack of rain or the peas have passed their season of growth. I’ll plant kale and shard to replace the pea plants. So far the most produce comes from the chili pepper plant and the lettuce. The zucchini and squash are disappointing. It appears the leaves have some kind of mold; yielding only four vegetables. It’s too early to tell, but it looks like the tomato plants will yield well this year.

The urban garden as it looks in early June; squash and peas begin flowering.

Oh, Adam was a gardener, and God who made him sees
That half a proper gardener’s work is done upon his knees,
So when your work is finished, you can wash your hand and pray
For the Glory of the Garden, that it may not pass away!

(link: The Glory of the Garden by Rudyard Kipling)

The correlation between gardening and prayer had not occurred to me until I read that Kipling poem. American culture has forgotten how growing one’s own food is a lot of labor and often a gamble. This year there has been sufficient rain, but previous years these mountains have experienced drought. In years past I’ve lost plants to a Spring frost, plant mold and blight. But when Kipling wrote those lines ubiquitous herbicides and pesticides where unavailable as well as genetically modified plants. Gardening and spirituality have always been connected, but only in recent history that we have forgotten that truth as the culture detoured to a road of industrial foods.

So far the garden has yielded a modest supply of lettuce for occasional salads, a dozen or so snap peas, a half-dozen chili peppers. The tomatoes should be coming in soon as well as the squash. The first load of vermicompost was used in the garden box where the peppers grow. (It may be difficult to see in the photo, but there are two green totes behind the tomato garden box where I vermicompost table scraps.) At the current pace, worms compost one tote of table scraps every three to four weeks. It’s hard to imagine that this little garden provides so much work that many evenings and weekends are filled with labor on my hands and knees. 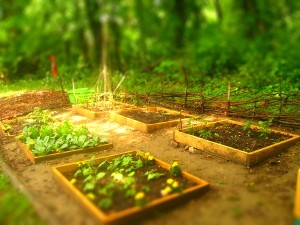 Garden project: garden beds almost complete as of early May.

All six garden beds are in and mostly full. A couple more tomato and pepper plants would be a nice addition. Plus I’m waiting for the kale and chard to mature enough to put them in the ground.

The lettuce leaves are big enough to pull a couple for a sandwich a couple of nights ago.

Only thing that’s a bit annoying is how the slugs seem to attempting to take over the southeastern corner of the garden. Two techniques to organically get rid of unwanted snails include beer and salt. First I’ll try the beer bait first. If the slugs persist, I’ll use salt.

If this doesn’t curb the invasion, the next phase of attack is salt. 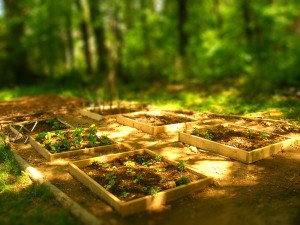 New feet within my garden go,
New fingers stir the sod;
A troubadour upon the elm
Betrays the solitude.
—Emily Dickinson, “The Garden”

Unlike the poem, the troubadour is a male cardinal and the tree is an red oak. And no, I didn’t color coordinate the bird and tree. Actual bird and tree reside on or near the location of the garden. A cardinal couple made their home east of the garden project and routinely perch on a lower limb of the red oak tree and comment on my gardening progress.

At this point, all six garden boxes are built, soil turned, topsoil added and plants planted. Plants yet to plant include chard and kale and a couple blueberry bushes. The blueberry bushes will go in the northwest corner.

The garden receives at least six to eight hours of direct sunlight each day, but not until after noon. On an early morning in late April the sunlight provides dappled shadows on the garden. By May, the surrounding trees are in full green dress and the garden remains in full shade until noon.