A poem for a friend composed on a manual typewriter

At least five years ago, an old beat up manual typewriter provided a platform to compose poetry and other writings.1 It was an effort to return to an intentional practice of crafting poetry and prose without distraction of disruptive media.

For years and years, a notebook, journal or sketchbook was never far from reach. But one night after a long night of poetry and music at Beanstreets followed by an even longer time of coffee and conversation at Old Europe, a friend convinced me to try blogging. 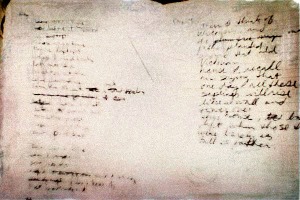 The immediate response to blogging was infections.2 Connecting with people all over the country, networking, sharing and being part of an active digital community was exciting. The practice of writing allowed me to hone the craft of creative writing and exposed me to other writers across the country. One of those bloggers actually showed up at a poetry gig I did. She was on a cross-country trip to visit friends and wanted to visit in real life.

Over time, I noticed that my practice of writing notes, daily sketches and other activities had all but disappeared. Relying on keyboards, display screens, hard drives and servers presented became a crutch. My writing drafts and sketches appeared deceptively crisp and final in neatly formatted text documents and web blog interface windows.

So, I pulled the plug. Returned to handwriting and typing as practice.3 Some friends and fellow poets saw a few samples of typewritten work and suggested I post it on my blog. It was a novelty. A curiosity. So, I did.

One of the first photographs of a poem I composed on a typewriter was written for a friend. It was posted about this time of year — in 2011.4 A few days later I followed up with another poem5 that was later read at poetry event.

I do not claim to be the first person to post an image of a poem typed on a manual typewriter. But I noticed a trend in that direction about a year after posting those images of poem sketches.6 Not sure exactly if I started the trend. Probably did not. Maybe other like-minded individuals who sought to return an organic practice of handwriting and typing as a mode of composing their visions and ideas.

Here is to a five year anniversary of analog writing.

NOTES:
[1] In truth, I composed poems on an electric typewriter prior to that. Did it for decades. Did not own a personal computer until… well, that is another story.
[2] That was when there were a mere couple million web blogs in the world. Now, there are some platforms, like Tumblr, boasting 100 million blogs. The blogosphere has become quite congested.
[3] Examples of some the 30 poems in 30 days journal posts with photos: here, here and here.
[4] April 1, 2011, blog post.
[5] Poem: “Never Look A Doughnut Dealer in the Eyes”
[6] Examples include Typewriter Poetry, Remington Typewriter Poetry, and the most popular is Tyler Knott (though his web page has an archive going back to 2003 (which is odd because he uses Tumblr as a platform and Tumblr was launched in early 2007… maybe he migrated his content from some other source to Tumblr… but I digress) the posted images do not begin until 2012 (unless I am mistaken).