Work is the curse of the reading class.

How many books did you read last year? According to some reports, one in four Americans did not read a single book in the last twelve months. Three out of the four who did read in the last year read only one book. But the reports are even more dismal when a distinction is made between any books and books of literature. For example, books on business, cooking, gardening or self-help are in a different category from books of literature. Further, books on business and marketing by Tim Ferriss, Seth Godin or Simon Sinek are not considered literary works. Books by Dante, Plato and Shakespeare are works of high literature. Books of literature by American authors include Flannery O’Connor, Robert Frost and Thornton Wilder.

My own reading pattern shadows the national trend. This discourages me. Years ago I read more than 50 books a year. In addition to that, I used to read several literary journals, magazines and newspapers on the bus ride to the office each day. It was a delicious and robust period of time. But life interrupted this reading regimen. A dream job, mega commute, cross-country move, career change, new job at a legacy media organization, and more commuting disrupted my reading habits.

It is a struggle for me to completely read one single book from cover to cover. The desk in front of the window holds eight books. I may have to return all these to the public library partially read. Or renew them. The library must be weary of me renewing a copy of a theological book. I must have renewed it several times over the last few months. One report I read stated the reason people do not read books is due to their busy work/life balance.

The interruption to the reading habit is due in part to the daily commute. 90 minutes a day spent traveling from home to work. Public transit would be nice. However, no public transit system services the rural communities surrounded by cultivated fields and farmland. Travel accounts for more than 15 days of my time each year. And then there are the long hours of production work. The job is mentally demanding. My fatigued mind only desires to turn on the record player and go to sleep when I return home.

Most Americans spend more than two hours each day on Facebook, Instagram, LinkedIn and Twitter. That equals more than 40 days a year. From an economic stand point that seems like a lot of wasted productivity. What that means in practical terms is that my social media feeds are on life support. I do not spend time on Facebook or Twitter at all. LinkedIn occasionally. And I deleted my Instagram account. Eliminating social media activity allowed me to reclaim some of the time lost to commuting and work.

A second action put into practice during the last few years included reading great books of literature. Mostly. Plato’s The Republic, Beowulf, Sir Gawain and the Green Knight, The Autobiography of Benjamin Franklin, Booker T. Washington’s Up from Slavery, The Autobiographies of Frederick Douglas, Tolstoy’s Anna Karenina are some of the books read during the last year and a half. The classical education curriculum of my children helped me form a list of great books to read. I added a few books to the list to include Asian and Near Eastern studies. I explored Basho’s The Narrow Road, an anthology of Rumi, Hafix and Lalla, and Ryokan’s Sky Above, Great Wind. Most recently I attempted to read and compare three different translations of Dante’s Divine Comedy. An ambitious task that I failed. Ended up focusing on selected cantos for comparison before the books were shuffled back to the public library.

The virtue of reading.

Why is reading books, especially, great books, important? The virtue of being well-read is the goal. Do not leave it up to the academics and professionals to read great books. C. S. Lewis wrote that “the simplest student will be able to understand, if not all, yet a very great deal of what Plato said; but hardly anyone can understand some modern books on Platonism.” He continued by encouraging readers to acquire firsthand knowledge of the source material rather than to rely on secondhand commentary. Being a well-read individual has the potential to foster a civilized society. But you must be vigilant, designate time, pick up a book and read it cover to cover.

Memories and images from Fourth of July 2015 swim in my mind as the day comes to a close. Some of the photos I posted to my Instagram feed. Memories of a parade, a cook out, a game of croquet, … END_OF_DOCUMENT_TOKEN_TO_BE_REPLACED

How does the expression go, three on a Mac?[1] So, what do you do when the old Macbook Pro’s[2] hard drive fails while you are working on a web site design project? Use the back up machine. That is what a back up laptop is for, right? Until, it no longer is able to function and black screens. Complete disconnection from all client work files and emails.

Thankfully, emails can still be received and sent from the iPhone. Maintaining contact with client is essential. Sure it is a 3G model[3] from late 2008 or early 2009, but it still works. Sort of. Actually, the only applications that work well are Instagram and WordPress. And only when the mobile device stops announcing “No Service” and connects to the network. So, no email contact either. Had to call clients and inform them of technical difficulties, please stand by. They are very understanding and supportive.

No worries. Life is full of challenges. And solutions. Will be happily washing dishes and scrubbing floors in the mean time. And writing stories on scrap paper. Happy New Year.

Years ago, the practice of capturing a moment or event was accomplished with pencil and sketchbook. 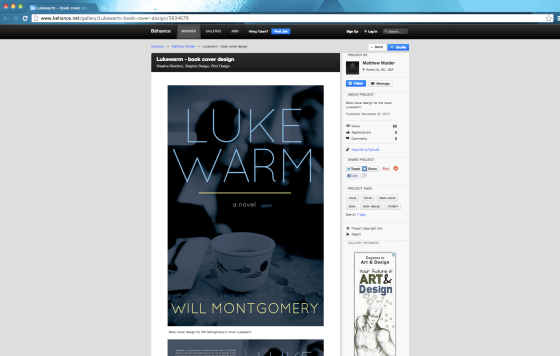 One of the book cover designs I promote on the social network Behance.

“Why share our work in social networks?” was a question recently asked on a professional forum. My reply: two reasons: 1) promotion and 2) personal brand. It was a Malcolm-Gladwell-Blink response and I clicked the “add comment” button without much thought (which is not my usual practice). My thoughts still linger on that question, “Why…?”

A few months ago I came across a few articles asking the question “Does social media promote or enable narcissism?” [1] [2] The article that impacted me most was from a source I never read. In the post, the author, Dodai Stewart, reflects on piece in The New Yorker and her comments are stinging and self-revelatory.

Just look around: Between Twitter, Facebook, Tumblr, Instagram and Pinterest, the whole ME ME ME thing has swept the nation. Here are MY thoughts, MY pictures, MY shopping wish lists! We call it sharing, but it’s just egoistic self-indulgence, usually. LET ME TELL YOU WHAT I WANT. But wait: Enough about me… what do you think about me? [3]

Hm, narcissism and self-absorption. Herein rests the lingering thoughts of a week or so ago.

As a professional, promoting my goods, services and whatnot help to grease the gears of capitalism, right? Conventional wisdom (or at least American business wisdom), purports that if consumers are not aware of your product/service, customers will not purchase from ME. So, I am advised by business owners and other professionals to promote MY skills, services, products, etc. And not only that, I need to establish MY personal brand (so that consumers can be more emotionally and psychologically invested in the products/services I provide).

Maybe social networks are not promoting narcissism and self-absorption as much as one might think. There may be a greater systemic issue that only social networks magnify.

Why am I wandering the mall at this hour? (Taken with instagram) (Source: http://instagr.am/p/HklH4lzJJ8/)

And so it ends…